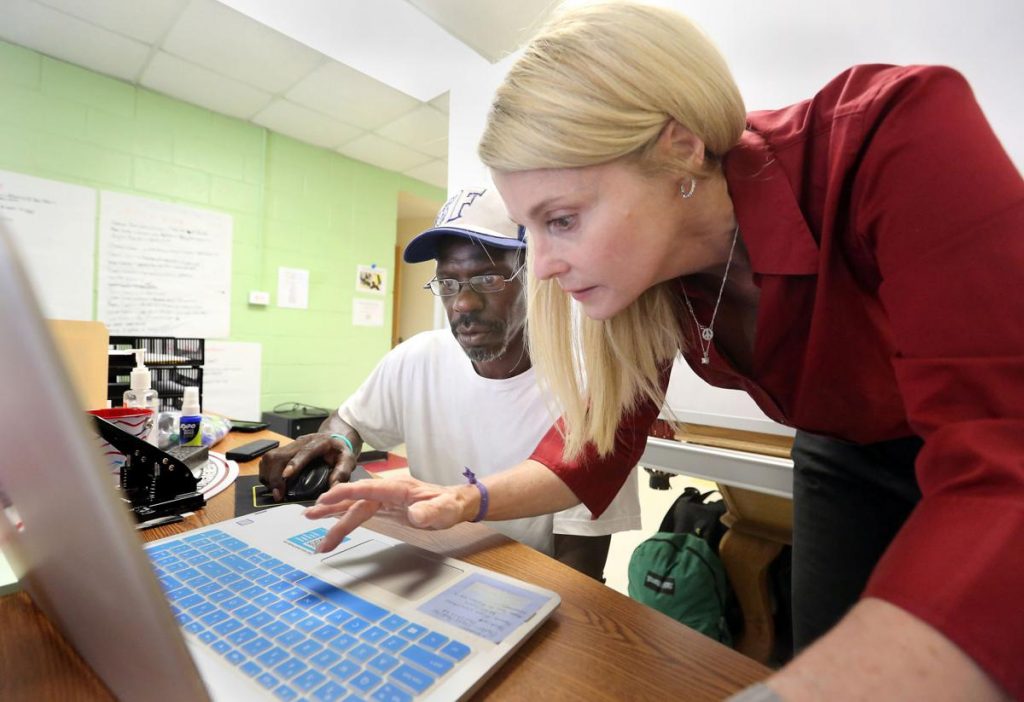 An hour after the daytime help center for the homeless opened Thursday morning in Charleston, nearly every seat in the waiting area was taken.

About a dozen people sat quietly in an assortment of chairs in the cinder block building at 529 Meeting St., some bearing down on clipboards and scribbling answers to questions like, “Do you have a resume?”

They waited for their turns to sit at one of the tables in the back of the room with the two women running the place, Lisa Pansing and Marie Elena Roland.

A strong scent of laundry detergent wafted through the air as a washer churned in the next room.

“I heard about this place from a friend who went through here and got placed in a home,” said Leon Fludd, who showed up first thing Thursday. He’s been sleeping on his friend’s couch for five months in North Charleston, and he’s desperate to get his own place again.

With his arm in a cast, he said he can’t do the construction work he once did. On his monthly income of $1,214 in Social Security and $15 in food stamps, he hasn’t been able to find anywhere to live on his budget. He’s hoping Pansing and Roland will have ideas he hasn’t thought of yet.

Fludd is one of about 25 to 30 people the center sees on an average day. Some have been living on the streets for months or years. Many show up needing showers, clean clothes, housing, jobs to pay for the housing and photo IDs to apply for the jobs.

It’s an overwhelming to-do list that often keeps people in the cycle of homelessness, Roland said. The center offers them a physical place to sit down and sort it all out — something that’s been missing from the landscape of homeless services in Charleston.

“All of our organizations do a great job … but nobody connects all the dots for one person,” she said.

After a single day at the center, some people leave with everything they came for. Others, at the very least, have fresh clothes and a better outlook. 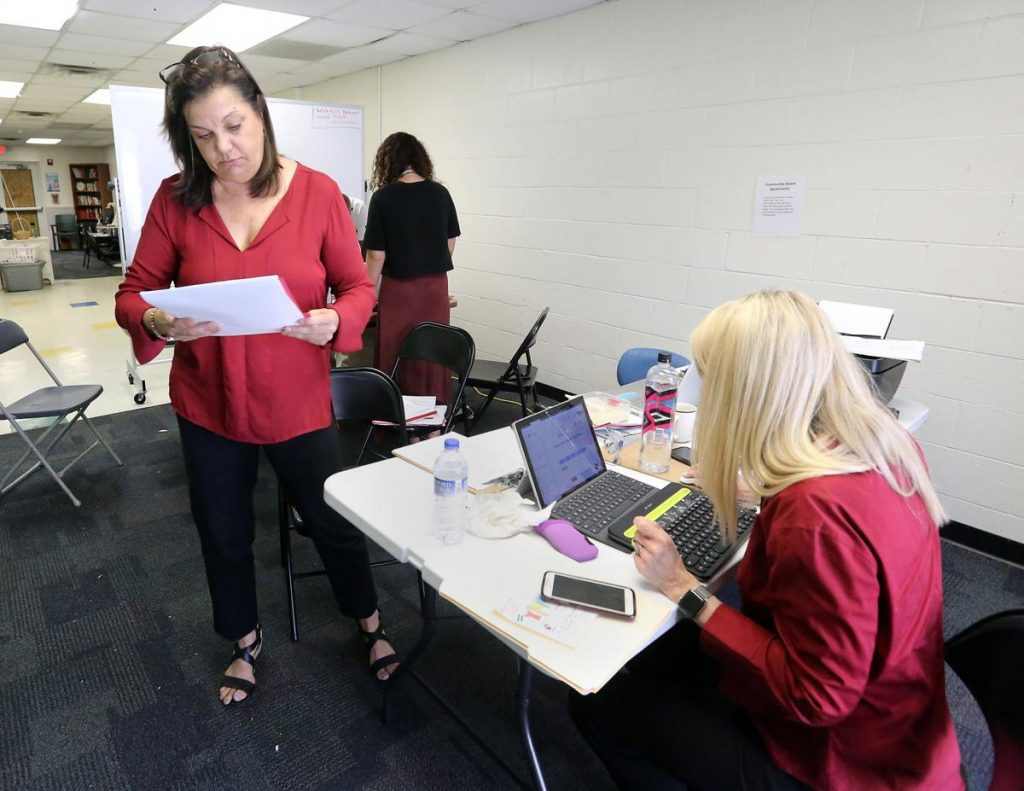 The center opened in late June initially under the leadership of We Are Family, a Charleston nonprofit that focuses on homeless youth, especially those who identify as LGBTQ.

Pansing and Roland, who run the nonprofit Military Community Connections, entered the building about a week and a half ago. They took over the lease and the general operations so We Are Family can focus primarily on its core mission, serving young people.

Most adults go to Pansing and Roland, and anyone younger than 25 goes down the hall to We Are Family. Both organizations meet with individuals and run through all the things they need to get into a better situation.

Other services are partnering with them in various capacities at the center, which hasn’t been named yet. The Medical University of South Carolina is offering virtual doctors’ visits. Origin SC, a North Charleston nonprofit, will offer financial counseling. SC Works will be there soon to help connect people to job opportunities.

The city of Charleston pays the rent and utility expenses.

Mayor John Tecklenburg said the center has proven to be a critical solution for people who don’t know where to start when they’re ready to get off the street.

“I’m gratified that we’ve put in a relief valve, if you will,” he said.

Some people who have come in for help end up becoming helpers themselves.

Lee Stover, for instance, has been living in his van for years. When it was towed recently, all he needed was a small loan to get it back. Roland helped out, and he offered to do whatever she needed at the center to work off his debt. Instead, she hired him as a full-time employee. He’d been job hunting for as long as he could remember.

“It was like, wow. Goosebumps,” he said. “Now I have a sense of trust and responsibility.”

He sits at a makeshift front desk to help people sign in and fill out paperwork. He also drives them around to appointments and helps them run errands. Now he’s saving up to get a mobile home. 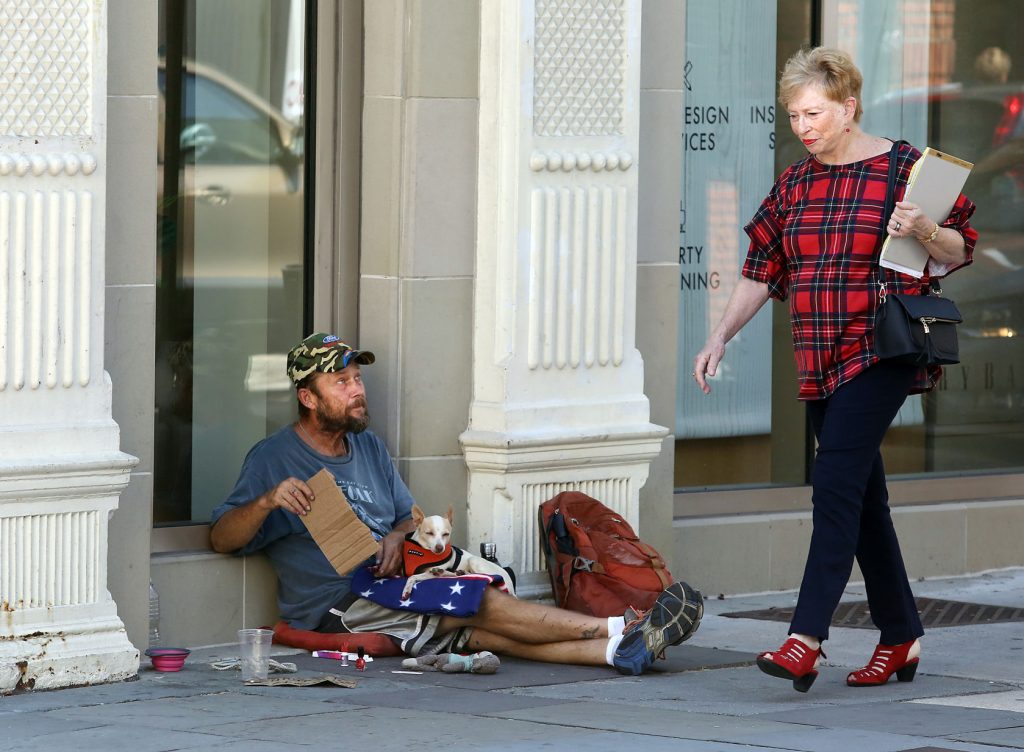 A panhandler tries to get the attention of a woman as she walks past him and the corner of King and George Streets Friday, September 21, 2018. Brad Nettles / Post and Courier Staff

The center is also part of the city’s solution to address panhandling complaints from business owners on King Street, who say the activity has caused an uptick in theft, litter and other public nuisances along the busy commercial corridor over the past year.

The city lifted its ban on panhandling in 2014, so asking for money on the street isn’t a crime. But trying to curb other bad behavior has been difficult for law enforcement.

In April, the city passed a “sit-lie” ordinance that prevents people from loitering in one place along King and Market streets, an effort officials said was aimed at keeping the sidewalks maneuverable for pedestrians.

But acknowledging that many people lingering along the streets are homeless, they said equal effort would be placed on giving them resources to change their circumstances.

“To be able to give them a ride to a center that’s offering resources, it’s great,” said Lt. Heath King of the Charleston Police Department. “It’s not something we’ve had in the past.”

Some who work on King Street have noticed a change. Katie Phillips, a salesperson at Channels, said there aren’t as many people lying in front of the store or coming in to ask for money.

But Daniel James, owner of Las Olas just a block away, said the same people are causing the same problems.

Tecklenburg said, while it’s hard to quantify how many people are leaving panhandling behind because of the new center, he thinks it’s only going to help.

“I believe it has some direct impact, as folks who might be panhandling get to a point in their lives where they’d like to get to a place of shelter and move their lives to a better place,” he said. “On the other hand, if there are individuals who aren’t seeking help and they’re breaking the law, we’re there to enforce the law.”

He said those interested in supporting the center can donate to the Homeless to Hope fund, which was created in 2016 to help people move out of the homeless encampment known as Tent City.